A New Technology for Prosthetic Skin 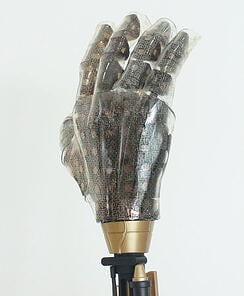 Some prosthetic limbs are so advanced that they can be controlled by their owners, using nerves, muscles, or even the brain. Unfortunately, no bionic arm of leg will ever be able to provide an absolute feeling of realism until they have a skin that can actually sense the external environment and send the collected information back to the amputee’s nervous system.

In order to create prosthetics that can function more like real body parts, scientists are designing artificial skins that pick up on tactile information. So far, these skins have gotten very good at sensing pressure. A skin designed by Stanford engineers is in fact 1,000 times more sensitive than human skin. Under the leadership of biomedical engineer Dae-Hyeong Kim, a team of American and Korean researchers at Seoul National University has developed a skin that can stretch over the entire prosthesis. This new artificial skin has a dense network of sensors made of silicon and gold that can mimic the sensitivity of real skin. More exactly, the bulk of the new skin is composed of a flexible, transparent silicone material called polydimethylsiloxane, or PDMS. Embedded within it are silicon nanoribbons that generate electricity when they are squished or stretched, providing a source of tactile feedback.

The artificial skin can detect pressure, heat and cold, and even moisture. It even has a built-in heater so it feels like living tissue. This skin replicates the abilities of real skin to sense the world. For example, temperature and humidity sensors would allow the user to touch a child's forehead and feel whether it was hot and damp enough to indicate a fever.

The humidity sensors are made up of capacitors. When the polymer surrounding a capacitor absorbs water, the moisture changes the polymer's ability to store a charge. The capacitors measure that storage change and use it to determine the moisture levels of the environment.

The researchers tested the humidity sensors in an unconventional way. First, they compared the artificial skin's humidity readings to the measurements of a commercial humidity sensor, and the results matched up pretty well. In order to be scientifically rigorous, the researchers also had the prosthetic hand prod various diapers, and it turned out it was able to distinguish between wet and dry ones.

Since it is designed especially for bionic hands, the scientists also gave the skin enough elasticity so users can stretch and move their fingers like they were real. By adjusting the shape of the silicon nanoribbon patterns, the researchers can adjust how stretchy the skin is. For regions where the skin does not need to stretch, such as the fingertips, the nanoribbons are packed in a tight linear pattern to maximize sensitivity. For areas like the wrist, which need more flexibility, the nanoribbons form a more loopy pattern, allowing for more room to expand by up to 16 percent.

In addition, layering the sensors in a thin film also enhances durability, and reduces the risk of mechanical fractures; while platinum nanowires and ceria nanoparticles allow the electrodes of the prosthetic to interface with the user's peripheral nerves while minimizing inflammation. 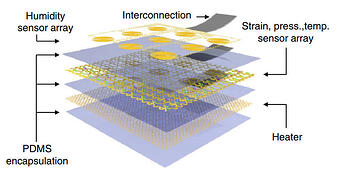 The resulting prosthetic is highly sensitive and adaptable. In fact, the prosthetic hand and laminated electronic skin could encounter many complex operations such as hand shaking, keyboard tapping, ball grasping, holding a cup of hot/cold drink, touching dry/wet surfaces and human to human contact. Unfortunately, since scientists are still looking for a way to connect the sensors to the human nerves, it might take some time before their creation will be able to give someone their sense of touch back. The researchers managed to transfer pressure information from the skin into the brain of a rat, but the method may not be safe to use on people.

While the team claims that this particular material is one of the most sensitive smart skins created, it is definitely not the first attempt. The Technion-Israel Institute of Technology designed a similar product using gold nanoparticles in 2013, while scientists from Georgia Tech are developing their own technology that uses piezotronic transistors.