Joe Paterno: His Impact in the Social Media Age

In an age where breaking news is predominantly dispatched and received through social media platforms, it is hard not to have heard about the death of legendary Penn State University football coach Joe Paterno. In fact, many people heard of his passing before it actually happened. Because media outlets are vying so desperately to win the race to publish the latest story before anyone else, they sometimes jump the gun. News titans such as CBSSports.com, People.com and the Huffington Post all fell victim to this, reporting that Joe Paterno had lost his battle to lung cancer a day before he actually had.

So why is this important? If nothing else, the premature reports of Paterno’s death show the substantial impact he had on the media and the media’s impact on his legacy. So much so that Penn State started teaching a communications course called “Joe Paterno, Communications, & the Media” to examine why he dominated, for so many years, in the media realm.

It’s no coincidence or trick of fate that Paterno managed to maintain a monumental media persona for almost half a century. It was something he crafted with surgical precision. And perhaps it was the biggest reason for the beatings he sustained at the hands of the media back in November when former Penn State defensive coordinator was accused of child sexual abuse. During his 45 years at the helm of PSU, Paterno used one specific media technique that proved to be his biggest asset and as of recent, his biggest flaw: consistency. 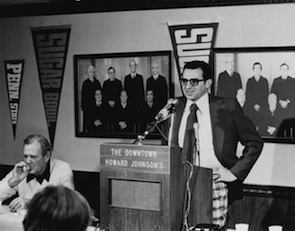 Paterno took the reins of the Penn State football program before the 1966 season. Since then, he has personified the definition of stoicism by continuing the philosophy that students are academics before athletes. This “Grand Experiment” as he dubbed it, was revolutionary during his early career. Football players were thought of as dim-witted but Penn State has since become a top-tier institution in graduation rates among student-athletes. This notion translated into loyalty, as seen by Paterno’s millions of dollars worth of contributions to the university’s numerous athletic departments and, most notably, its library.

But what do his sentiments have to do with his interactions with the media? These sentiments, without fail, acted as his foundation for dealing with the press. His undying loyalty and no-nonsense attitude have become his most notable character trait when dealing with press conferences, press conferences that began as a handful of reporters informally sitting around a table with the legendary coach to several media outlets bombarding him with questions whether in person or telecommunicated and streamed online.

Since November, it’s been difficult to log into Twitter (Twittle-do and Twittle-dee as described by Paterno) and not see a tweet, a blog, or a comment about the latest break in the scandal connected to him and subsequently, his death. In fact the tweets have already reached the millions, thrusting Paterno’s death into most-tweeted territory along with Steve Jobs, Osama Bin Laden, and Moammar Gadhafi. The end of 2011 not only saw the firestorm of Tweets surrounding the Paterno and the Penn State scandal, but Facebook also brought about numerous groups calling for his job and groups protesting his ultimate removal as head coach.

The simple fact of the matter is that Joe Paterno manipulated and exploited the media to his advantage, and the media eventually did the same to him. Penn State is really onto something by teaching Paterno’s media savvy, interactions, and techniques as a course. For over 40 years they stood untested and unquestioned. While news platforms evolved, Paterno’s conversing didn’t. But if anything the social media age and Paterno’s interactions with it has taught us anything, it’s that one has to adapt to their surroundings to survive, whether in the real world or digital world.