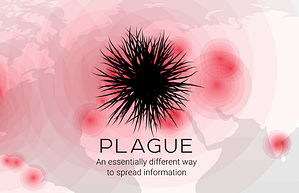 More specifically, with Plague every disease is a simple bit of content, which might be a text, a link, a photo, or a video. When you unleash it, it immediately seeks out the nearest four smartphones with the Plague app installed, infecting them with your content. When those four users next log in, they will have the choice to spread the infection by scrolling the screen up, and infecting another four nearby users, or inoculating themselves against it by thumbing the screen downwards, and abating the spread of the virus. You can also choose to comment on any given post.

Every original post identifies the patient zero, and any additional comment remain anonymous. There is no way to follow or message specific users. Your only means of interaction is to deal with the infections as they come. Since there is no friending or following on Plague, everyone has a fair and equal chance to be heard by the whole network right from the start. If your information is interesting to people, it can eventually spread to the entire world. In addition, users can see how many people have passed along a post with any related comment.

In an age where all social media sites seem to be converging into a Facebook and Twitter hybrid, Plague’s approach is quite unique. Instead of seeing posts from people you follow or whatever is trending, a post on Plague is designed to spread much like a virus in real life.

According to its co-creator Ilya Zudin, while on other social networking apps individual users can accumulate large followings and influence, and consequently increase the chances that their content will go viral, in Plague everyone starts and remains on the same footing. Since it all comes down to the quality of the content, every Plague user has the same chance to see their post gain traction. Everyone has four opportunities to spread any given infection, and anything posted on Plague has the same chance of either spreading around the globe or going no further than its creator’s smartphone.

Generously rated by its users, Plague still needs a few improvements. The most recurrent critiques regard the iOS style interface that needs to be upgraded, and a few GPS issues. In fact, it appears that Plague constantly search for a GPS signal to update the current location even when the app is actually closed and the GPS function is turned off. As a consequence, the device’s battery tends to be drained much faster. Either way, Plague can be downloaded free of charges from Google Play Store and iTunes.