Cloud Computing – What is it? Do I need it? Where do I get it

The rise of cloud computing is shifting the center of gravity. It is changing the nature of competition within the computer industry. Technological developments have up until this moment pushed computing power away from central hubs: first from mainframes to minicomputers, and then to PCs and laptops. Now a combination of cheaper and more powerful processors, and ever faster and more ever present networks, is pushing power back to the center in some respects, and even further away in others. The cloud's data centers are, in effect, outsourced public mainframes that users do not have to keep up, or update.[1]

Cloud Computing is making it cheaper and cheaper to use new technology and not spend a lot of money just to set it up.

Cloud computing is about offering infrastructure as a service instead of as an in house server or big desktop.

Cloud Computing is about using an application over the web. No longer having to install and update the software on your server, computer or laptop.

Cloud Computing is about no longer buying more and more space for your server, or computer, because all the data lives in the cloud instead of on your computer or server.

Cloud Computing is about not caring what operating system that YOU ARE running on your computer, as long as you have a browser, you can use it.

Okay WHAT is Cloud Computing?

First the term "Cloud" is a figure of speech for the internet. It was inspired by the cloud picture or symbol that is often used to represent the internet in diagrams.

Wikipedia explains cloud computing as an "internet based development and use of computer technology. Because the technology comes from the internet it was given the name 'Cloud'. In concept, it is a paradigm shift whereby details are abstracted from the users who no longer need knowledge of, expertise in, or control over the technology infrastructure that supports them, because everything is done in the cloud (internet). It typically involves the provision of dynamically scalable and often virtualized resources as a service over the Internet. "[2]

In general, cloud computing customers do not own the physical infrastructure; instead they are renting usage from a third-party provider. They avoid spending money on the hardware and software purchases. They use the resources as a service and pay only for resources that they use.

Web-based e-mail, Salesforce, E-Bay, Facebook and MySpace and online games are all examples of what are increasingly called cloud services, and are accessible through browsers, smart-phones or other devices. 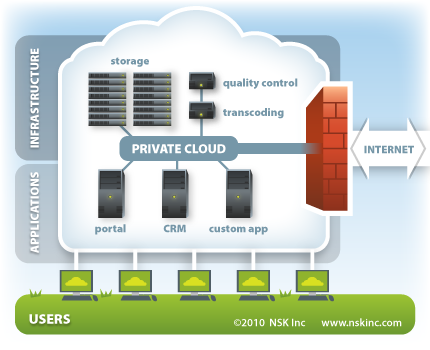 Cloud computing offers significant benefits to any company, although it is an unbelievable dream come true for smaller and mid-size companies. Now instead of making do with a small under-resourced IT staff trying to imitate the productivity of a billion-dollar company, smaller and midsize companies can now access enterprise-class solutions with limited up-front costs and easy scalability. Today, the cloud makes leading-edge technology available to everyone, for pennies on the dollar, including consumers.

Compare a typical Exchange Server $3,000-$6,000 -- offering perhaps 500MB of email storage per user -- to Web-based email services that offer up to 7GB of storage. Free. (Google's corporate version offers 25GB per user for $50 a year.

Where do I get it?

Look for providers who deliver adequate security and support -- and be willing to pay for it when appropriate. Do not under-estimate network bandwidth expenses. Being around for the long haul is important too, because there seems little doubt that over the long term cloud computing will supply more and more companies' technology needs.