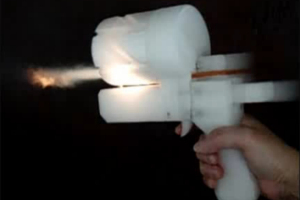 A Japanese man, 28 year old Yoshitomo Imura, has been jailed for two years for the crime of making 3D-printed guns and instructing others about the process. Imura, who used to work for the Shonan Institute of Technology, reportedly made several guns, and also put a video online showing how he did it. Imura’s design was known as the ZigZag, a revolver that can take six .38 caliber bullets. Japan has very strict gun laws, and, following his arrest in May, Imura was sentenced for producing and possessing two functional firearms.

Meanwhile, in the United States Cody Wilson, who just 2 years ago gave the world its very first look at what a 3D-printed metal gun could do, has moved to a new form of gunsmithing. Wilson’s latest radically libertarian project is a PC-connected milling machine, the Ghost Gunner. Like any computer-numerically-controlled (or CNC) mill, the one-foot-cubed black box uses a drill bit mounted on a head that moves in three dimensions to automatically carve digitally-modeled shapes into polymer, wood or aluminum. However, Wilson’s CNC mill, which is sold for $1,200 by his organization Defense Distributed, is designed to create one object in particular: the component of an AR-15 rifle known as lower receiver.

A lower receiver is the body of the gun that connects its stock, barrel, magazine and other parts, and is the rifle’s most regulated element. Anyone can mill his own lower receiver at home, and order the rest of the parts from an online gun shop, creating a semi-automatic weapon with no serial number, obtained with no background check, no waiting period, or any other regulatory hurdles. Some gun control advocates call it a “ghost gun.” Selling untraceable gun bodies is illegal, but no law prevents anyone from making one.

Bypassing the legal obstacles regarding lower receivers is not a new idea for gun enthusiasts, and several hobbyist gunsmiths have been making their own AR-15 bodies for years. (Wilson, - who was included in 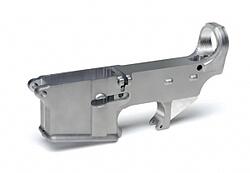 Wired’s, 2013 list of deadliest people on the planet, alongside Qassem Suleimani, head of Iran's Special Forces, and the former Egyptian president Mohamed Morsi).

However, the process becomes easier and more accessible than ever before. Anyone could privately fabricate an untraceable gun designed to be printed as easily as ink on a page.

In addition, the process of legally milling a metal lower receiver is easier than it sounds. Using the Ghost Gunner to carve a lower receiver from a raw block of aluminum would be a lengthy, complex process. However, the firearm community has long traded in so-called “80 percent lowers,” lower-receiver-shaped metal pieces that sell for as little as $80 and are roughly 80 percent finished. They only need to have a few holes and cavities milled out to become the body of a working gun. The bureau of Alcohol, Tobacco and Firearms (ATF) has defined that the 80 percent line as the closest an object can come to a regulated rifle without legally qualifying as one. But precisely finishing the last 20 percent of a lower receiver has still required access to a milling machine that typically costs tens of thousands of dollars.

Since Wilson first launched Defense Distributed in 2012, he has demonstrated a talent for throwing technological gasoline onto political fires, from uncontrollable 3D-printed guns to Bitcoin money-laundering software. His latest creation promises to be equally controversial. Wilson’s intention is to release the Ghost Gunner on the heels of a debate in California over a state law that would ban the manufacture of all guns without serial numbers. The bill, widely known as the “Ghost Gun ban” and introduced by Los Angeles state senator Kevin de León earlier this year, was designed to outlaw either 3-D printing any gun parts or those creating 80 percent lower gun part without government-assigned serial numbers in California. The

legislation passed in California’s senate and assembly, but was vetoed Tuesday by the state’s governor Jerry Brown, who wrote that he “can’t see how adding a serial number to a homemade gun would significantly advance public safety.”

That veto represents another setback for gun control advocates like state senator De Leon who have warned of the dangers of the homemade lower receivers.

Police believe that an AR-15 built from an 80-percent lower 3-D part was used last year by 23-year-old John Zawahri to kill five people in a rampage through Santa Monica before he was himself killed by police. Zawahri had a history of mental illness and had previously been denied a license to buy guns. The semi-automatic weapon he assembled from the bootlegged lower receiver and parts ordered online was also illegal in California. Meanwhile, regarding the possibility for Wilson’s milling machine to be used to create untraceable weapons that result in real violence, Wilson stands by the answer that he has given to that question when it was asked of his 3-D printed guns, “the potential for violence is part of the price of freedom. I believe it is in the stable of popular rights afforded to the people, a republican ideal consistent with civil liberties”