The Battle between the Nexus 7 and the Kindle Fire - Technology 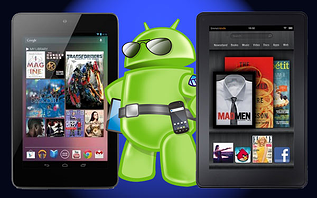 If you’ve been drooling over the Apple iPad or the Kindle Fire, your drool is going to turn into a waterfall after you have the Nexus 7 in your hands! The competition between the three tablets is now heating up. Available for pre orders now, the Nexus 7 is the new talk of techies everywhere. Although the Nexus 7 and the Kindle Fire are both similar to each other, the big question is what makes the Nexus 7 unique and different from the Amazon Kindle Fire? If you’re planning to buy a tablet or just want to see what all the hype is about then keep reading!

When it comes to the outer shell of the Nexus 7, she is quite the beauty. Its weight matches with the weight of the iPad at 12 ounces, which means it is lighter than the Kindle Fire. It is 7 inches with a high resolution LCD gorilla glass screen, making it damage resistant. Another feature about the Nexus is that it has a 1.2 megapixel front-facing camera with a microphone capable of video conferencing and taking photos, another thing the Kindle Fire doesn’t have.

Now let’s focus on the inside. The Nexus is expected to have a 1GB of RAM, available with either 8GB or 16GB of storage, with a Tegra 3 processor and a high powered GPU. It will run on Android’s latest OS called Jelly Bean, which is fast, fluid and smooth or as they call it, “buttery smooth.” Therefore, moving widgets on the home screen is a lot smoother and faster and watching movies will be amazing. Jelly Bean will also allow the sharing of photos and videos from device to device wirelessly. As for wireless, both Google and Asus are trying to forego 3G & 4G data to optimize competition against the Kindle Fire.

In comparison, the Amazon Kindle Fire runs on Android’s 2.3 Gingerbread and comes with its own perks. It has a vibrant color screen and Amazon Prime members enjoy unlimited streaming of thousands of popular TV shows and movies. It provides fast web browsing, 8GB of internal storage and 5GB music storage in the Amazon cloud drive. The major downturns of the Kindle Fire are that there is no 3G network and it’s slow to the user’s touch.

Both the Nexus 7 and Kindle Fire range within the same prices being $199 for 8GB. The Nexus 7 also provides 16GB for a price of $249. They both provide cloud storage and have a vibrant and colorful touch screen. What sets them apart is the huge factor that the Nexus runs on Android’s newest OS Jelly Bean. Let’s face it, the newer it is, the better and who wouldn’t want that? The Nexus also provides Bluetooth and GPS chips, which the Kindle Fire lacks. The Nexus 7 is no doubt going to be the next big thing with its many new features. Many people are going to want to get their hands on them as soon as they debut, which will be this month! So if you’re planning to get a new tablet for yourself or for someone else, check the Nexus 7 out, it’ll be a great gift!