RAID (Redundant Array of Independent Disks) was first introduced in 1987 by David A. Patterson, Garth A. Gibson and Randy Katz at the University of California. More importantly, RAID is a well known and widely used form of data protection and disaster recovery.

Mirroring- Mirroring is when data is duplicated and written onto a seperate disk, thus creating an identical disk.  This is important because redundancy will help prevent data loss if any disk failure was to occur. However, the versions of RAID that implement this techonology will have lower efficiency due to the duplication.

Striping- Striping refers to the quantity of data that an individual drive can read and write in array at one time.

Parity- This is used for fault tolerance.  For example, a parity is when data is calculated from two drives and then stored into a third drive.

Rebuild- This is the process of recovering data when disk failure has occured.

Single or Multiple Bit Corruption- This form of corruption indicate that an error (or more) was made during the writing process.

There are nine common forms of RAID, however there are many more that have been developed over the years.  The most common forms are:

This is one of the building blocks for other RAID levels, however cannot be called a proper RAID level since redundant information does not get stored.  It uses a striped disk array, which means data is separated into blocks which are written onto different disk drives and performs best when data is striped across multiple controllers when there is only one drive per controller

RAID 1 introduces mirroring and has one disk designated to store information and another that duplicates the data.  Due to the duplication, data redundancy is extremely high in this level, and leads to a higher cost of implementation. However, in the case of a signle disk failure, no rebuild is necessary since all of the original data has already been duplicated.

RAID 2 uses Hamming Code which is a linear error correcting code (ECC.)  This is when data is recorded onto ECC disks, the code will verify whether the information is accurate  and correct it if it is not.  So with this form of RAID, information is striped in levels instead of blocks. And with the use of ECC, this level is able to correct single bit errors very well while providing a high data transfer rate at the same time. 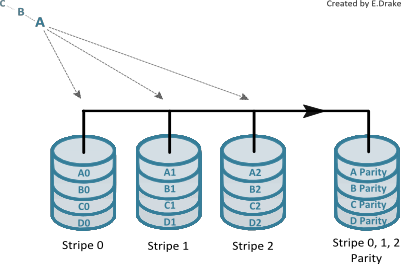 Data is split at byte level, striped then written onto data disks.  Stripe parity data is generated on writes and is recorded onto an additional parity disk and is checked on reads.  Due to the extreme subdivision of information, multiple hard disks need to be accessed in order to reach one block of information.  Because of the characteristics, RAID 3 requires a minimum of three drives. 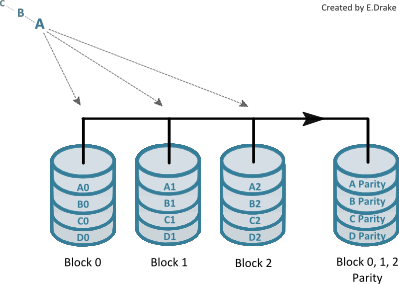 RAID 4 is very similar to RAID 3, since it uses a designated parity disk, however it stripes at block level.  It requires a minimum of four hard disk drives. Unfortunately, this level of RAID quickly became obsolete due to its inefficiency.

This level of RAID uses block level striping, however, there is no hard drive dedicated for storing parity data. Instead, parity data is distributed across all hard disks.  Information is also backed up by using the parity data which accumulates to the size of one hard disk.  This level of RAID is one of the more popular versions and has a low cost of redundancy.

This is an extension of RAID 5 which eliminates the risk of data loss due to disk failure.  In this level, there are two independent parity blocks that follow separate algorithms (Hamming Code and Reed-Solomon.)  This additional and separate striping allows for a higher possibility of data recovery and prevention of permanent data loss if singular or multiple hard disk drives were to fail.  Essentially, this has the highest fault tolerance with the lowest cost.

RAID 10 (or RAID 1+0) features elements of both RAID 1 and RAID 0. With this level each block of data is mirrored and stripped.  It requires a minimum of four drives however it works very well in the case of multiple disk drive failures.

RAID 01 (or RAID 0+1) is very similar to RAID 10, however there is no parity generation. With this level, data is initially striped into a various hard disk drives, then that set is mirrored.  Like others, this level requires a minimum of four hard disk drives.

Cons: Who should use it? Sources: